The neighborhood's often-used bocce courts on Stiles Street were refurbished in 2019
after having hosted thousands of bocce games and ﻿tournaments throughout the decades. 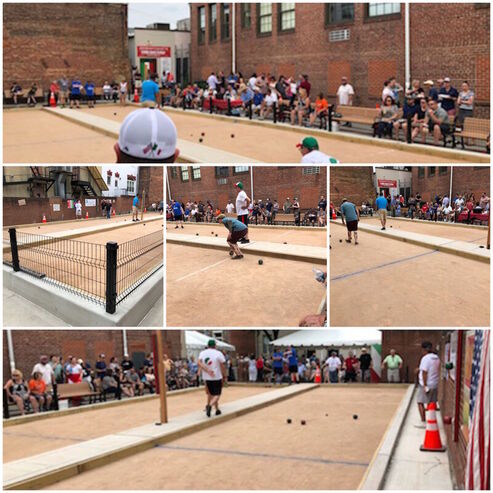 The bocce court in Little Italy is a popular place to be during warmer months, and often an intriguing sight for visitors as they stroll by. The courts are open to the public (balls not provided) and spectator benches are available, as well as a restroom and water fountain. Many residents of the neighborhood - and those who grew up there - among other players, enjoy league play between May and September. The courts are most active on Tuesday, Wednesday and Thursday evenings as teams on two leagues compete with each other in this popular backyard Italian sport. As well, bocce tournaments are held during St. Leo's two summer Italian festivals and during the Columbus Day Commemoration in October.

The bocce courts were built in 1993 and soon after, various leagues began to form and grew in size. The courts have been used for local and national tournaments, including the ones conducted during Saint Leo's two popular summer Italian Festivals. The tournaments draw hundreds of people into the courts to play and spectate. In 2019, the Department of Recreation & Parks and Baltimore City Government had budgeted money and assisted to have the courts refurbished. Flannigan Construction Company was commissioned for the project.
Powered by